As part of a larger Xerox Foundation effort to support individuals pursuing technical degrees and help the United States address its shortage of scientists and engineers, we manage three programs with a common theme – providing educational access to underrepresented minorities. In 2013:

Throughout the year, we invested more than $1 million in these three programs, which support the strategic interest of the company by enabling us to recruit from a highly motivated and talented pool of technically educated people. They also provide excellent opportunities for Xerox people to be involved on college campuses.

At the same time, we continue our partnership with the National Academy Foundation's Academies of Engineering. These "schools within schools" provide incentives for minority and female high school students to pursue college degrees and ultimately careers in science, technology, engineering and mathematics, the STEM principles.

We are a founding member of Change the Equation, a start-up organization aimed at rallying support from the business community around STEM education, identifying programs that have empirical results, and leveraging them on a national scale. We have made a $1 million, four-year grant commitment to Change the Equation.

Other investments in education and workforce preparedness include: A Better Chance; Prep for Prep; the National Action Council for Minorities in Engineering; Monroe Community College (in New York); FIRST; Catalyst; United Negro College Fund; Posse Foundation; Hispanic Scholarship Fund; and the American Indian Science and Engineering Society. Also, the Xerox Foundation invested in four organizations to assist returning members of the military who are experiencing difficulty finding work upon their return.

Through our matching gifts to colleges and universities, 500 institutions received 1,300 matching gifts. The top five beneficiaries of this program in 2013 were the University of Rochester; Rochester Institute of Technology; Stanford University; Nazareth College; and Monroe Community College. 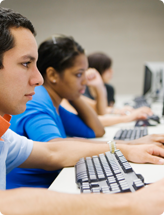 HOPE Technology and Education Center Honors Us With Founders Award.

The HOPE Technology and Education Center recognized Xerox with its 2013 Founders Award for its continued commitment to the development and prosperity of Englewood and surrounding Chicago communities. Xerox has contributed laptops and other operations fundamentals that have enabled the nonprofit organization to offer free computer courses, employment readiness workshops and life-skills training.

HOPE Technology and Education Center Honors Us With Founders Award.

The HOPE Technology and Education Center recognized Xerox with its 2013 Founders Award for its continued commitment to the development and prosperity of Englewood and surrounding Chicago communities. Xerox has contributed laptops and other operations fundamentals that have enabled the nonprofit organization to offer free computer courses, employment readiness workshops and life-skills training.